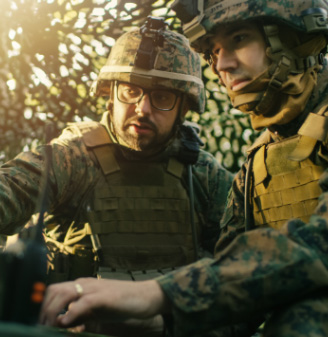 The Royal British Legion has reported that an estimated 300,000 ex-armed forces personnel in the UK are suffering from military noise-induced hearing loss and tinnitus as a result of exposure to excessive noise in the line of service.

The epidemic has led to a large number of ex-service personnel from the Army, RAF, Navy and Special Forces seeking legal advice on making a claim for military deafness and tinnitus due to the devastating and life-changing effects of these conditions.

As well as hearing loss and the debilitating condition tinnitus, many military personnel also suffer from hyperacusis, a heightened sensitivity to everyday sounds. All of these conditions can be grounds for making a claim for military hearing loss if it can be proved there was a breach by the Ministry of Defence in its duty of care.

In other words, if you were not provided with ear protection, or other appropriate measures were not put in place to protect you from exposure to the likes of vehicle or aircraft noise; mortars; explosions; gun and artillery fire and pyrotechnics, you could be eligible to make a claim.

Could you be eligible to make a claim for military hearing loss?

Whether your hearing loss can be apportioned to an individual injury caused by a blast or some other trauma to the ear, or is due to ongoing unprotected exposure to excessive noise, there could still be the opportunity to make a claim. The Ministry of Defence owes a duty of care to all its personnel, and since 1987 it no longer enjoys immunity from civil or criminal prosecution.

Military deafness claim compensation is vital for military personnel whose lives have been adversely affected by hearing loss and other related conditions. Treatments are available and, whilst there is no cure, many of them are proven to help relieve symptoms and improve quality of life. But without compensation to cover the costs, access to the best treatments is severely limited.

Hearing loss is said to occur when individuals are exposed on a regular basis to noise in excess of 85 decibels. If the noise level exceeds 120 decibels, then immediate damage can be instantly sustained.

In a regular workplace, employers are required by law to supply staff with ear defenders when noise levels reach a daily average of 85 decibels. In the armed forces however, personnel are regularly exposed to these volumes on a daily basis, often without any protection. The standard assault rifle used by the British Army for example is reported to reach levels of 156 decibels when fired, and the 81mm mortar can expose service personnel to levels as high as 175 decibels.

The Ministry of Defence has in the past been challenged over its £6 million spend on specially moulded earplugs that were intended to block out battle noise. In practice however, they did not work.

In America, the military has come up with an effective, although expensive, solution in response to the huge epidemic of hearing loss from the military over there. They have invested in high tech hearable earplugs that allow service personnel to hear important commands whilst still protecting their ears from sudden explosions or gunfire. It goes to prove there is a tangible issue.

What should I do if I have suffered hearing loss as a result of military service?

If you are a current serving member of the armed forces, have been medically discharged or have recently left the military and have suffered hearing loss as a result of what you believe to be a breach of duty of care on the part of the MoD, make the first step in talking to a legal specialist in the field of military deafness claims.

Nigel Askew Solicitors, based in Lincolnshire, is a law firm with a proven track record in claims for hearing loss.

Contact us today by calling 01507 609027 or complete the on-page enquiry form and one of our expert military hearing loss lawyers will contact you to discuss your potential claim.